Auckland, 3rd of February 2012
KIWIS can’t fly…
Well, that’s not quite true. About one week ago I just landed on Auckland airport on the North Island of New Zealand. What I will do here, about 10.000km from Berlin, in a country with 30 times more sheep than inhabitants, with lush green hills as green as the famous kiwi fruit grown here. Where the sports and outdoor crazy people adore a flightless bird as their national symbol, yes, even call themselves “kiwis”?! I will tell you in my blog within the following few weeks.
Poking my beak beyond the “rim of my plate” I am looking for inspiration by oversea’s science communication and of course for business contacts. One more reason for my travel is trapped within my business name; however, you’ll read about that later :-)

When I went to New Zealand eleven years ago, I never made it to the Northland where they say, you might even see some of those rare and threatened kiwi birds. I saw lots of protection and attention signs but so far no kiwi at all. No wonder, you say? Right, they life hidden in secret and remote spots, deep in the forest, scared of dogs and cats, lonely and …sometimes you hear their cries at night.  In Waipoua Forest you can stare and glare instead at the only ones and oldest Kauri trees left after decades of tree cut down for building houses and the processing of Kauri gum.  Kauri and rainforest used to cover most of Northland, once the home of many kiwis. Strolling through the lush moss, overgrown tree trunks, tweeting birds, is still breathtaking! But I will watch out further for kiwis, promise. 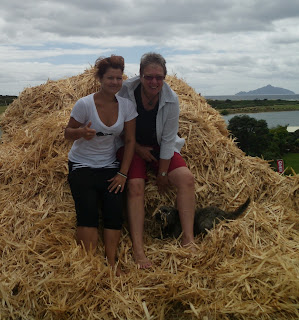 On my way up north I met gorgeous Rosemary Neave who is a true Kiwi. Although born in Australia, she used to live in the Waipu region most of her time. Being a communicator at heart just as myself, I helped her cleaning up her jungle outside in her garden and in turn she offered me a comfy and heart-warming home called “The Red Door”. Rosemary runs a very cosy apartment and homestay especially for women travellers. If you need travel advice in New Zealand or any place on the globe you may ask for her advice and website womentravel . She used to travel a lot and we shared many interesting discussions, e.g. about the people in Waipu who are pretty proud of their Scottish heritage what they celebrate every year in January with the Highland Games. Yes, kiwis tossing timber poles and bagpipe music played by the eldest gentleman in town. That would be the picture. Moreover I was surprised to hear that there were plans to build a nuclear power plant in that beautiful area. Hard to believe as New Zealand is set on the “ring of fire” with lots of (still active) volcanoes and moving earth plates. Far too dangerous and due to the plenty natural thermal energy resources on the North Island rather not necessary you would think. Concerning the way how to deal with future energy matters Fukushima did play its role here, too.

Kiwis and science in New Zealand
Similar to the development of science communication in the UK and Australia a Science and Media Centre exists steering and supporting the public communication of Kiwi research matters to stake holders, journalists and the general interested Kiwi “on the street”. Media people as well as scientists find hints and guides how to deal with each other. Journalists can learn about the method how scientific research and the peer-review process and thus how scientists work. For scientists in turn is described in easy words what media professionals need to know and how even sensitive and risky matters can be communicated to the public.  It is explained why there is always a bit uncertainty in research and that it is OK if scientists can not always explain everything!

‘Doing science is like trying to bake a cake without a recipe;

you keep trying things and eventually find a way that works.’

Everybody who ever lost its best cake recipe and then tried to figure out how it worked might understand how hard scientists often have to try, experiment and stick to their research with passion in order to succeed!
Have a look at their website on www.sciencemediacentre.co.nz!
For pictures and more "tweets" please visit my facebook site! 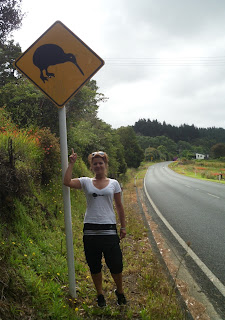